How Can Archetypal Astrology Actually Enhance Your Free Will on Your Spiritual Path? 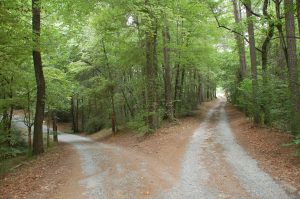 When You Come to a Fork in the Road, Take It.

Rather than merely predicting your future, following some kind of pre-programmed “default mode,” the true power of a consultation with a qualified Archetypal or Jungian Astrologer lies in its ability to reveal perhaps hidden opportunities within your given inclinations as outlined in your astrological horoscope or “birth chart.”  This snapshot of our planetary solar system against the backdrop of the constellations, or “fixed stars,” at your exact moment of birth is said to show your likely life patterns and personality dynamics. However, this kind of insight-based approach actually expands the scope of your Free Will, within your given probabilities, empowering you to become a more conscious co-creator of your own future.

A horoscope does not show our future written in stone, and no responsible astrologer would ever claim that it does.  What a horoscope does show:  the tendencies and potentials of our inherent personality patterns, for better and / or for worse – as they are also likely to unfold in time, as represented by the cyclical movements of the planets. But these inclinations and likelihoods are not absolutely guaranteed. But neither can they be completely eliminated.

The personality, like the body, is a vehicle for the soul, and is not meant or able to be completely bypassed or transcended – we are not here on Earth by accident or mistake. However, we do not have to slavishly follow our “path of least resistance” either. Finding the “middle path” can become a co-creative and ever-evolving dance.

In other words: While we cannot control the prevailing winds – no matter how enlightened we may become –  we can learn to set our sails, and we can learn to tack – potentially radically changing where we end up in life – especially inwardly – even given the “outline” set forth in our horoscopes.  We can also learn to work in sync with the Divine Timing of our karmic lessons, perhaps even turning challenges into opportunities – for spiritual growth at the very least – rather than being completely broadsided by inner and outer “weather conditions” that are somewhat predictable and transmutable. (The root of Divination = Divine.)

An insightful astrologer can help catalyze your individual process of unfoldment, regardless of whether you are facing easy or difficult cycles. Pointing out any upcoming pitfalls you will likely be facing, along with  optimal opportunities for growth (and consciousness) during both challenging cycles and “fortunate” or expansive cycles – which might otherwise be wasted – supports your spiritual development over time, and helps you achieve your highest potential – which is also shown in the birth chart.

Human life being what it is, we can often see (particularly with 20/20 hindsight) that we tend to grow the most during or following our most intensely challenging experiences and relationships. This is why seasoned transformational astrologers encourage living life to its fullest, with all its ups and downs, as a full-contact sport, rather than from the sidelines as a spectator or bystander – much less a passive victim – 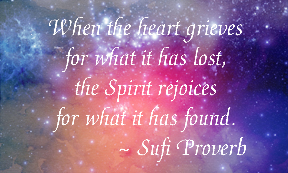 Archetypal or Jungian Astrologers believe that astrology works on C.G. Jung’s principle of Synchronicity, rather than linear cause and effect. This means that celestial events are happening at the same time as human experiences on Earth, in parallel, like gears moving within gears. The microcosm is thought to be unfolding within the macrocosm, on respectively higher and lower levels, rather than planetary movements directly causing Earthly events in the same way that gravity, say, causes an apple to fall to the ground:

As Above, So Below
There are correspondences between the multiple levels of the holographic Universe we live in, which Archetypal Astrology describes in symbolic language as the archetypal themes at work over a lifetime, as well as the more immediate forces in evidence over shorter periods of time. But a symbolic language is not a simplistic equation of this-equals-that. By definition, a symbol has many possible meanings – and astrological symbols have many possible interpretations and expressions in real-life terms.  This is where some degree of Free Will is thought to lie, in our ability shift the specific expression of the energies involved, particularly from a less conscious level of expression to a more conscious level – by working at it. The principle way of “working at it” is through taking up serious spiritual studies and practices – and learning to make more conscious decisions in situations where we actually may have more choice than we may realize on our own.

Each Planet Heads a Distinct Column of Possibilities
Mars, for example, whether in a individual or national or a corporation’s horoscope, or a transit or progression chart, does not necessarily have to signify war, violence, anger, aggression, or competition – although it may. Mars can also represent action, drive, ambition, hard work, effort, will power. To some extent, to quite a large degree actually – with inner work and discipline – we can choose the level of expression of the Martial energy, within its given range of possibilities. What we cannot choose is to turn Mars energy into Venus energy, or Saturn energy. We can’t change columns. In and of itself, Mars is never going to translate into Venusian love, beauty, charm, or harmony; or Saturnian discipline, focus, or commitment. One of the highest expressions of Saturnian energy is wisdom – but that is usually achieved through hard-earned experience (another Saturn concept), and not conferred automatically. In combination with these other archetypal energies, wow, though, the sheer force of Mars can move mountains and build magnificent cathedrals – when it is consciously directed and shaped. Mars positively tempered by Saturn connotes skill and sharpening.  Or, in a less “evolved” stage, this combination can be like having one foot on the gas and the other on the brakes, in a frustrating “stop-go” pattern. When the two energies are working together intelligently, on the other hand, it is said to result in gradual, guided, and controlled progress.

Click here to see some sample Keywords associated with Mars, Venus, and Saturn from my instructional workbook (to be shared in upcoming classes), to see what it means to have “columns of possibilities” for these thematically arranged real-life planetary expressions.  You can also begin to see the commonalities among Planets, Signs, and Houses – and how they correspond to one another.  With the North and South Nodes of the Moon, we work with 12 Planetary energies associated with (or “ruling”) 12 Signs, and 12 Houses – so they are not 36 random factors, but three sets of 12 inter-related factors to learn and commit to memory to start building your fluency in this eloquent symbolic language.

A Helpful Hint for Prospective Students of Astrology:

This set of three 12-sided dice helps you learn and memorize the glyphs for the planets and signs, while also learning how to consult an oracle: 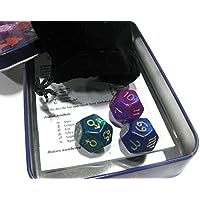 An Example of a Transformational Approach to a Challenging Life Pattern

If a highly “Martial” individual is complaining of generally feeling irritable, say, or if someone wants to reduce the angry side of a Mars transit or progression they are having, I recommend physical exercise and maybe even a martial art – so to speak – something physically strenuous and rigorous, not too gentle or “yin,” or intellectual or subtle.

That is, I suggest redirecting the challenging energy into productive, or at least harmless channels, rather than expressing it destructively, or suppressing it, only for it to turn inward (possibly as illness or mishaps), or perhaps to explode more violently later on. Or, if repressed for a significant period of time, blocked anger often manifests psychologically as deep-seated depression, with a whole new set of baggage to contend with.

Anyone dealing with strong Mars or Aries energy in their birth or transit chart usually needs some amount of regular physical activity to stay in balance. Sports can be a healthy competitive outlet, or simply a daily walk or run can help even out one’s energy. The more these folks are able to work with this fiery energy consciously, the more positive its real-life expressions are bound to be.

Particularly for women, learning to consciously direct one’s “yang” Mars energy toward a physical task like a gardening or renovation project – rather than judging or rejecting it, and trying to resist, control, or repress it – or attempting to soften or “spiritualize” this naturally masculine energy – will bring out the best that Mars has to offer.

These kinds of choices, once made more consciously and less judgmentally than we usually have available to us or experience them as being, can transform “problem” areas of life into joyful, where we truly can cultivate greater Free Will – within limits – and we can drastically transform the course of our whole lives and relationships for the better.

It can be profoundly liberating for an unbiased stranger to point out that you are designed to be rather highly strung, driven, feisty, and energetic, and to invite you to accept and work with this dimension of your personality. Especially when this IS the case, and you may have received a lot of harsh conditioning against this fundamental quality over which you did not have any apparent control – but were constantly berated with disapproving messages that you should fix or change these inherent traits: “Why don’t you just mellow out and be more easy-going, cooperative, and nice?” – that is, more Venusian or Libran. (Perhaps like your brother or sister.)

It can really take the pressure off when an astrologer validates that this is simply not an available option for a strong Mars / Aries type. However, guess what? Ironically, the more you accept who you are and learn to work with your intrinsic energies in more constructive ways, the more the rough edges actually do tend to smooth out. While you may never become a cuddly pussy cat, conscious Mars types can learn to retract their claws – at least on occasion. You can then access the best expressions of Mars’ strengths, such as drive and leadership ability, rather than being at the mercy of its unconscious negative (“Shadow”) qualities. But you still won’t get Venus.

Being given this kind of “permission” to be who you really are, to consider new ways of framing your experience and new ways of expressing your fundamental character, can be profoundly healing and liberating.

“Free Will is doing freely and gladly that which one must do.”
– C.G. Jung

Individuation is not about becoming someone new or other than who we are – it’s about becoming who we truly are, in the healthiest and most authentic sense, and embracing that unique essence as our Destiny.

Marjorie Partch is a counseling, teaching, and writing Archetypal Astrologer and Tarot interpreter with more than 35 years’ experience. In addition to her training in transformational astrology, she has studied Integrative Therapy with an emphasis on the work of C.G. Jung, and is a longtime student of yoga, meditation, and Kabbalah, as well as a practicing artist and poet. Marjorie was a contributor to Your Birthday Sign Through Time, Simon & Schuster, 2002. Transplanted from her native New York City in 2001, she is now happily available in Fairfield County. Marjorie also offers Reiki sessions in conjunction with or apart from spiritual counseling, with or without the tools of Astrology or Tarot; in person or by Zoom or by phone:
(203) 286-7525 / https://AlephTalks.com/Astrology.